Different ways to change the behavior of your Kubernetes cluster.

Kubernetes is highly configurable and extensible. As a result, there is rarely a need to fork or submit patches to the Kubernetes project code.

This guide describes the options for customizing a Kubernetes cluster. It is aimed at cluster operators who want to understand how to adapt their Kubernetes cluster to the needs of their work environment. Developers who are prospective Platform Developers or Kubernetes Project Contributors will also find it useful as an introduction to what extension points and patterns exist, and their trade-offs and limitations.

Customization approaches can be broadly divided into configuration, which only involves changing flags, local configuration files, or API resources; and extensions, which involve running additional programs or services. This document is primarily about extensions.

Configuration files and flags are documented in the Reference section of the online documentation, under each binary:

Flags and configuration files may not always be changeable in a hosted Kubernetes service or a distribution with managed installation. When they are changeable, they are usually only changeable by the cluster administrator. Also, they are subject to change in future Kubernetes versions, and setting them may require restarting processes. For those reasons, they should be used only when there are no other options.

Built-in Policy APIs, such as ResourceQuota, PodSecurityPolicies, NetworkPolicy and Role-based Access Control (RBAC), are built-in Kubernetes APIs. APIs are typically used with hosted Kubernetes services and with managed Kubernetes installations. They are declarative and use the same conventions as other Kubernetes resources like pods, so new cluster configuration can be repeatable and be managed the same way as applications. And, where they are stable, they enjoy a defined support policy like other Kubernetes APIs. For these reasons, they are preferred over configuration files and flags where suitable.

Extensions are software components that extend and deeply integrate with Kubernetes. They adapt it to support new types and new kinds of hardware.

Many cluster administrators use a hosted or distribution instance of Kubernetes. These clusters come with extensions pre-installed. As a result, most Kubernetes users will not need to install extensions and even fewer users will need to author new ones.

Kubernetes is designed to be automated by writing client programs. Any program that reads and/or writes to the Kubernetes API can provide useful automation. Automation can run on the cluster or off it. By following the guidance in this doc you can write highly available and robust automation. Automation generally works with any Kubernetes cluster, including hosted clusters and managed installations.

There is a specific pattern for writing client programs that work well with Kubernetes called the Controller pattern. Controllers typically read an object's .spec, possibly do things, and then update the object's .status.

In the webhook model, Kubernetes makes a network request to a remote service. In the Binary Plugin model, Kubernetes executes a binary (program). Binary plugins are used by the kubelet (e.g. Flex Volume Plugins and Network Plugins) and by kubectl.

Below is a diagram showing how the extension points interact with the Kubernetes control plane.

This diagram shows the extension points in a Kubernetes system. 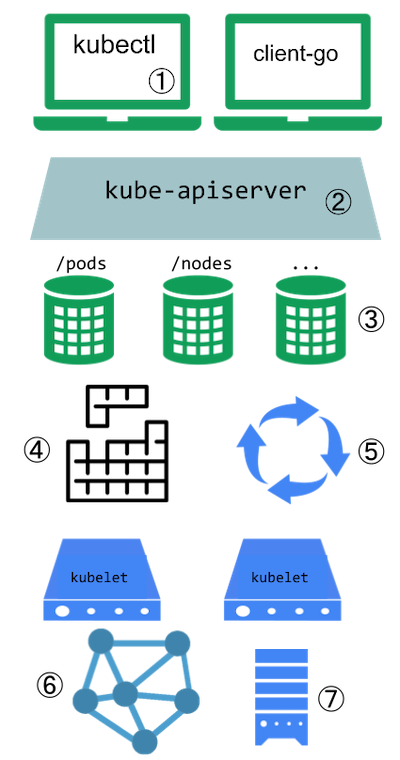 If you are unsure where to start, this flowchart can help. Note that some solutions may involve several types of extensions. 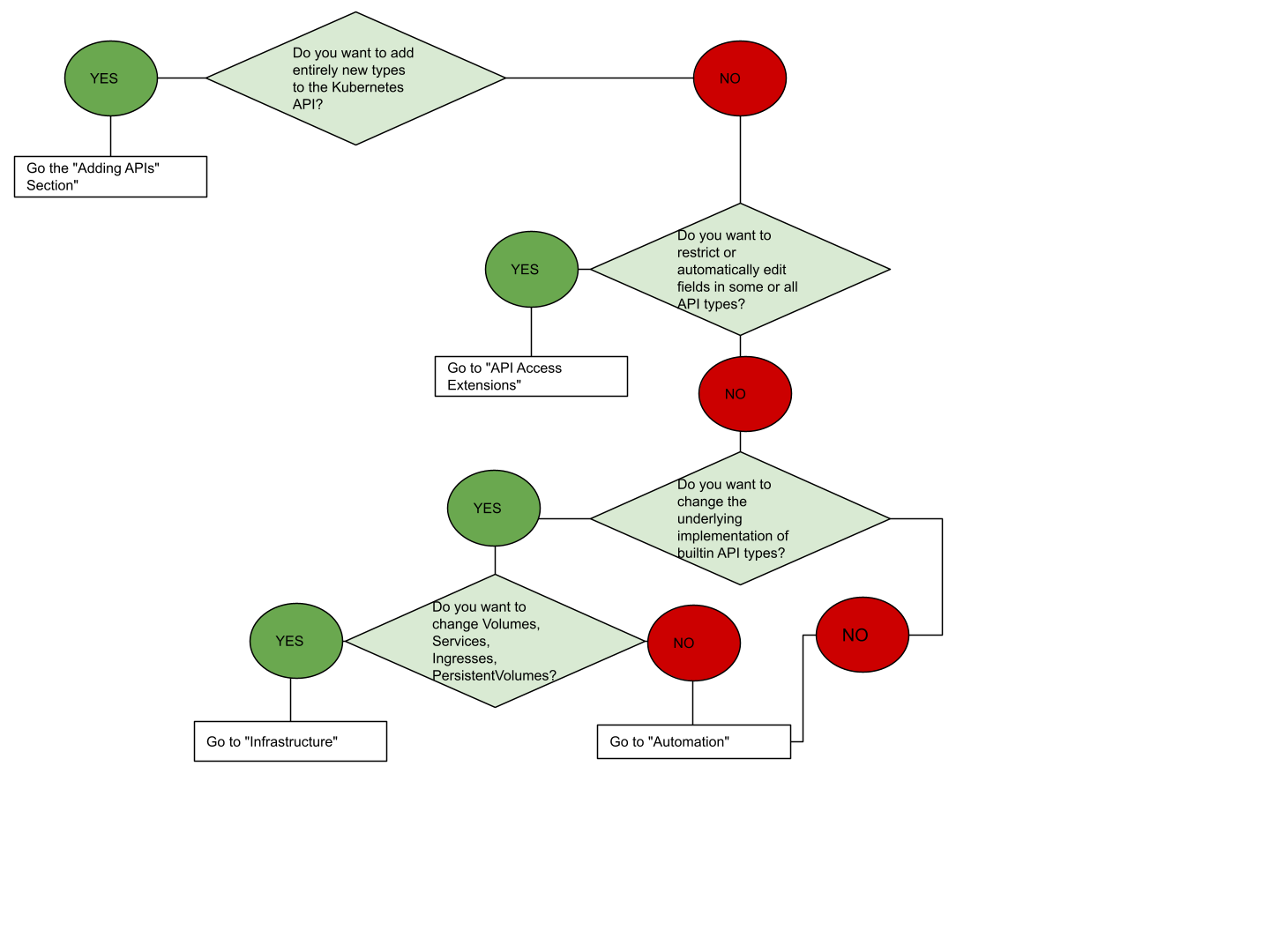 Consider adding a Custom Resource to Kubernetes if you want to define new controllers, application configuration objects or other declarative APIs, and to manage them using Kubernetes tools, such as kubectl.

Do not use a Custom Resource as data storage for application, user, or monitoring data.

When you extend the Kubernetes API by adding custom resources, the added resources always fall into a new API Groups. You cannot replace or change existing API groups. Adding an API does not directly let you affect the behavior of existing APIs (e.g. Pods), but API Access Extensions do.

Each of these steps offers extension points.

Kubernetes has several built-in authentication methods that it supports. It can also sit behind an authenticating proxy, and it can send a token from an Authorization header to a remote service for verification (a webhook). All of these methods are covered in the Authentication documentation.

Authentication maps headers or certificates in all requests to a username for the client making the request.

Authorization determines whether specific users can read, write, and do other operations on API resources. It works at the level of whole resources -- it doesn't discriminate based on arbitrary object fields. If the built-in authorization options don't meet your needs, Authorization webhook allows calling out to user-provided code to make an authorization decision.

After a request is authorized, if it is a write operation, it also goes through Admission Control steps. In addition to the built-in steps, there are several extensions:

Flex Volumes allow users to mount volume types without built-in support by having the Kubelet call a Binary Plugin to mount the volume.

Device plugins allow a node to discover new Node resources (in addition to the builtin ones like cpu and memory) via a Device Plugin.

Different networking fabrics can be supported via node-level Network Plugins.

The scheduler is a special type of controller that watches pods, and assigns pods to nodes. The default scheduler can be replaced entirely, while continuing to use other Kubernetes components, or multiple schedulers can run at the same time.

This is a significant undertaking, and almost all Kubernetes users find they do not need to modify the scheduler.

The scheduler also supports a webhook that permits a webhook backend (scheduler extension) to filter and prioritize the nodes chosen for a pod.

Was this page helpful?

Thanks for the feedback. If you have a specific, answerable question about how to use Kubernetes, ask it on Stack Overflow. Open an issue in the GitHub repo if you want to report a problem or suggest an improvement.